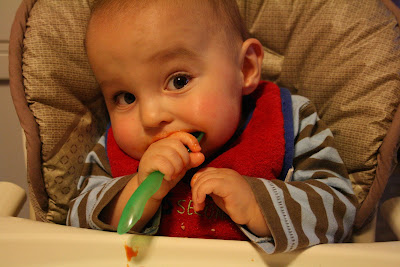 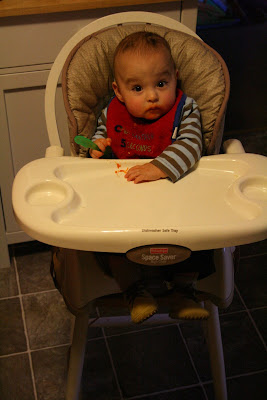 Tracey brought Colby to look for glasses yesterday. I guess his prescription is going to make at least one of his lenses rather thick. Couple that with the fact that he's so little and still a falls over quite a bit and we think we're going to end up with some...well....rather thick and not so stylish glasses for the Colbster. We are going to continue to look around and hopefully we can find something that fits him, gets his prescription right, but doesn't look like he has swimming goggles on! Ow well, it is what it is and as he gets older, there may be some things we can do to help his vision.
I'm still not entirely sure what his vision is....or what he can or cannot see. I guess one of the main things right now is that he's a bit cross eyed. So he's using mainly his left eye. It's amazing how the brain can some how shut off the information coming from his right eye and allow him to focus with just one eye. He's not horribly cross eyed and at times his eyes seem to both be focused on something correctly. But then other times it's very clear that his right eye is turned in.
Having glasses isn't the end of the world (as I type this looking through the glasses resting on my nose). I know Colby's situation is probably quite a bit different than mine, but I have hope that over the years they may be able to do some things to help straighten his right eye and correct his vision a bit. And if not, that's OK too. As it is, without glasses, he's able to see things fine it seems. He'll watch everything that goes on around him. He can focus on his little treats that we give him. And given the laundry list of complications the doctors told us he might have, at least thus far, we're continuing to beat the odds.
I've tried so hard though out his journey to keep a positive outlook. I do believe that you can in some ways influence your future. I'm sure all of you know people who are always complaining how bad their life is, all the bad luck they have and how things just suck. But if you take a step back and look at what's happening to them, I think it's much the same with that's happening to you and I. They just choose to focus on the negative, bring it to light and thus magnify it's affect on their life. I'd rather acknowledge that it sucks.....and move on. So much in life is all how you look at it and how you choose to react.
Tracey got Colby a high chair yesterday. He's been sitting in his bumbo, but it starting to get too big for that now. This fits him better, has a nice big tray and keeps him a bit more confined. When we'd but him in his bumbo, he's big enough that anything with a two foot radius of him was fair game! You'd set him down, move things way, then start tending to dinner or whatever and you'd hear his little hands getting into something. Although his butt would be in the bumbo, he'd be slouched over the sides, his arms outstretched reaching for things. LOL
We're still waiting for more teeth to break through. He's been drooling a lot and a bit cranky, but no more teeth. Just the bottom two for right now.
It's looking like a nice fall weekend in Connecticut. So I think I'm going to head over to the NICU today to visit them and let them see Colby. This afternoon we plan to go apple picking which will be nice. I love bringing Colby out to expose him to new things.
Posted by Scott at 8:02 AM

He looks so grown up in his little high chair. Maleia is starting to get her first 2 top teeth at the same time. Not a fun time :(

We have the same highchair...it's great :)

I totally agree with you and your thoughts on putting things into perspective. For two + years now I've been saying how wonderful life is and wondering where all the "bumps in the road" are. I realized a few weeks ago there are plenty of bumps around, we just roll over them and keep moving.

Have a great weekend!