Age 6...another wonderful year for Colby

Colby has had a wonderful year!  So much continues to change with him...new school, growing, overcoming more challenges and doing things that I wasn't sure he would ever do.
He has now transitioned to Kindergarten in the town in Glastonbury.  The school has been wonderful in working with both his challenges and his head aches.  They allow him to go down to the nurses office and lay down when he gets head aches.  They have also assigned a para to be with him most of the day to help him with his daily activities.  He has also transitioned off of Special Ed and onto a 504 plan.  At least that's the situation now.  The school has recently told us that they believe he could benefit from more PT and that they might need to move him back to Special Ed in order to get him what he needs.  If that's the case, it's fine with me.
We were at a school function the other evening and it warmed my heart to see so many kids, both his age and older, recognizing him, coming up to him to give him high-fives or hugs.
Colby also played soccer this fall!  It was with a special ed team that offers children with a wide range of challenges the opportunity to get together and play to whatever level their abilities allow.  Colby seems to be a bit unique because mentally, his is "there".  But his little body doesn't quite allow him to keep up with kids his age.  He doesn't have any depth perception and that plays a role in his balance and ability to maneuver around.  He also has a unique gate when he runs.....all of which makes him the special boy that he is.  : )


Last fall, Colby was still pretty uneasy on his feet.  He was also still on a drug called periactin which is used to treat seizures.  The doctors though this might help lessen his migraines.  We had some scary times when we received calls from his school or daycare saying that he had a migraine, started crying and then was "out of it", at times peeing himself or becoming partially paralyzed (one side of the body or the other becoming limp).  Tracey and I rarely saw this.  By the time we would arrive to get him, he would usually be somewhat with it and his muscle tone would be back...not normal, but he could at least hold himself up or squeeze our had gently.  It's scary when your child goes though something like that.  We brought him to his neurosurgeon and to a neurologist.  The thought was that possibly he was having some kind of seizure. 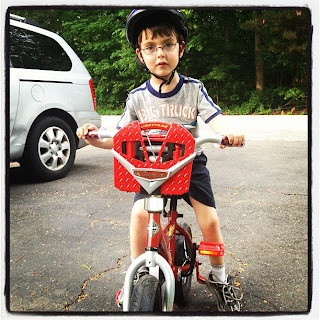 They did an EEG on him and tried to induce a seizure while monitoring his brain activity.  The doctor said that although the EEG did show activity that was not quite "normal", it was not seizure activity.  We also visited with the gastroentranologist.  Because of the total randomness of Colby's episodes, they ruled out Cyclic Vomiting Syndrome which he had previously been diagnosed with  abnormal activity, it was not a seizure.  Colby then saw his gastroenterologist who diagnosed him with Cyclic Vomiting Syndrome (CVS) some 4 or 5 years ago.  They said that now because of the total randomness of his episodes, that this was not CVS.  Good to have one thing off of his charts...but wish we could put our finger on what was triggering his episodes and figure out a way to help him.  We asked his neurologist that if it was not a seizure that he was having, could we take him off of the periactin as it made him sleepy.  They agreed.  And this made a difference in our little boy

Colby did have  rough patch earlier this year when his shunt that used to drain into his belly malfunctioned.  His bacterial fluid was being absorbed within his belly where the shunt drained.  But for whatever reason, it stopped being absorbed and his belly began to expand.  We thought he was just constipated.  But as his stomach grew and grew....and grew, we knew there had to be something else going on.  After an ultrasound it was determined that there was a lot of fluid in his belly area that needed to be drained.  Once the doctors got in there to take care of things, they found out that the fluid had gotten infected and he spent a good couple days in the ICU with his shunt draining externally.  After trying to put it back into his belly only to find that his body was no longer absorbing the fluid, they had to resort to draining his shunt into the atrium of his heart.  I was very nervous about this, but after talking to the doctor about any other possible options, this was really the only way to go for now.  We are now about 8 months since his last revision and things are going smoothly.
He continues to have migraines.  Most of the times they are almost more of a neusance to him than anything else.  He will  need to lie down, sometimes just for a couple minutes, sometimes for a while falling into a deep sleep.  And every once in a while, they will hit him hard.  When he gets bad ones, they look like a seizure or a stroke, leaving his partially paralyzed, taking away muscle tone is parts or all of his body, slurring his speech and making his eyes shake.  It's scary as a parent to watch your child go through this.  And there's really nothing we can do other than comfort him, document what we can and then let the doctors know.  He is often left lethargic and tired for the rest of the day, but they pops back to life by days end or the following morning at the latest.  He continues to see specialists in an attempt to minimize the frequency and affect of these episodes.
All of the medical stuff aside, Colby is doing AWESOME!!!  He amazes me with his memory, his sweetness, his ability to overcome hurdles to do things that you and I take for granted.  Thank you Colby Reed for being the strong little boy that you are! 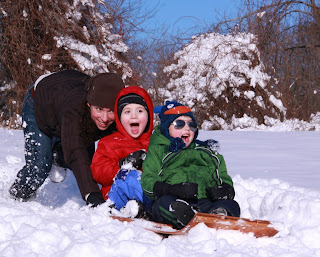 Colby sledding with Betsy and Eli...January 2013 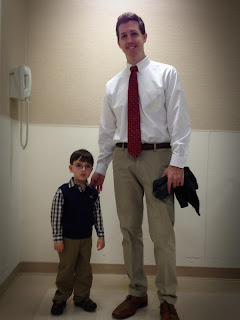 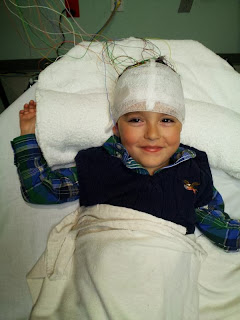 (Colby getting monitored for seizures......Dr said no signs of any seizure activity!) 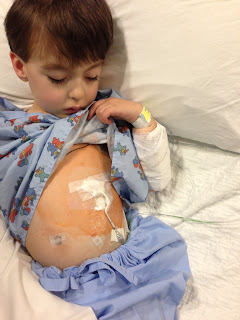 (Colby checking out his tubes while in the hospital) 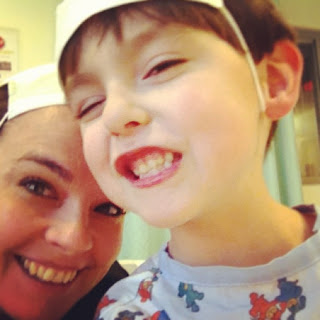 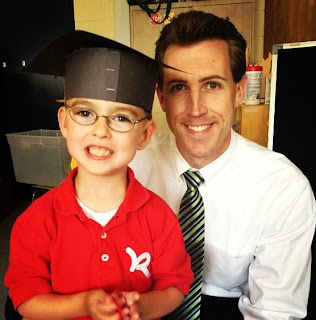 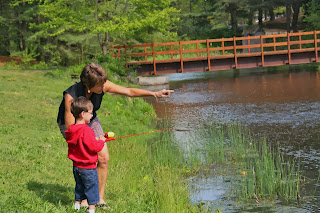 (Colby and Grandma Carole fishing during her visit to CT.  Spring 2013) 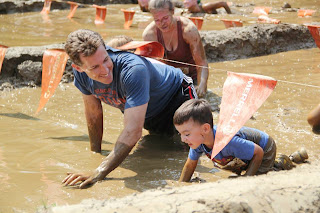 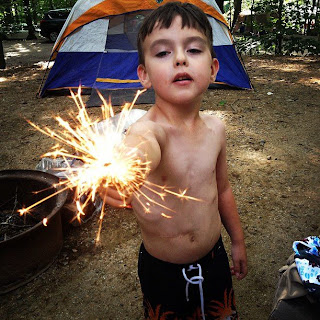 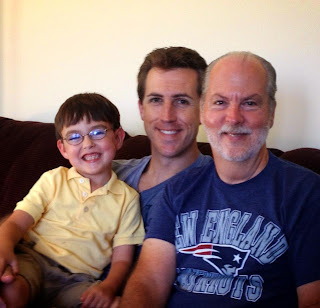 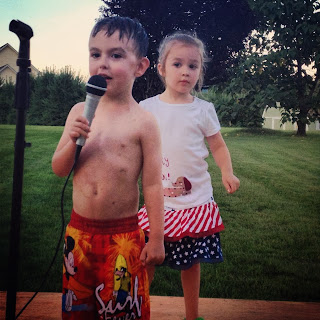 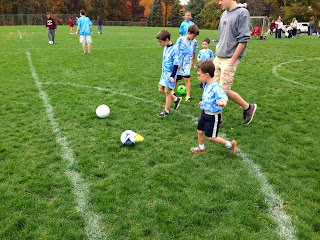 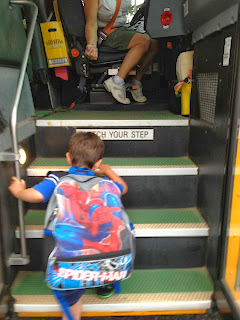 (Colby's first day of going on the bus!!) 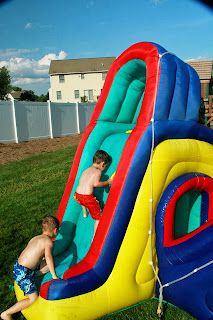 (I was absolutely thrilled to see Colby climbing this water slide all by himself!!!  He may not be as quick as some of his peers...but he can do it!!!)
Posted by Scott at 1:45 PM

Thanks for the update. It's nice to hear that he's a happy, resilient boy!

Hello,
I am a psychologist and a blogger (http://docgrumbles.wordpress.com). I am currently conducting a survey of bloggers who post about pregnancy, fertility, adoption, pregnancy loss, and parenting. I would like to extend an invitation for you to complete the brief survey found here:
https://www.surveymonkey.com/s/MLVBHDG
(I am very sorry to leave this in a comment like a spammer!)
Thank you so much!
Dr. Grumbles

Hittoplay is the place where you can have endless entertainment, happy birthday song in the best song ever.Content: Songs, News, Cooking Recipes, Technology, Religion from all around the world on demand or live Romantic Songs is just a click away .Dance numbers
Life without entertainment is colorless song mashups and we offer the best entertainment songs Arabic Top 10 Songs That you could have ever experienced. 10 Best SongsWe believe in providingDance songs latest and the best quality,song lyricsVideo experience.Songs Hindi