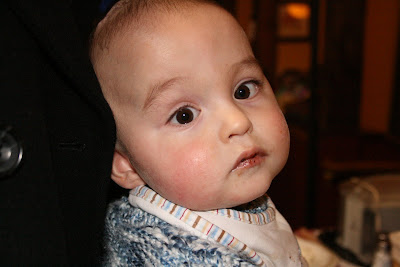 (Colby out and about at a chocolate bar, enjoying somethings sweet while listening to some live music that was playing that night.) 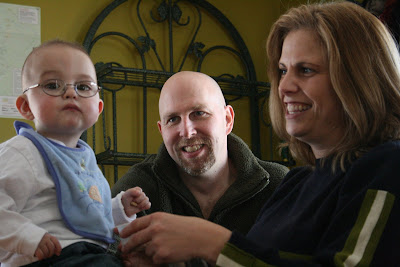 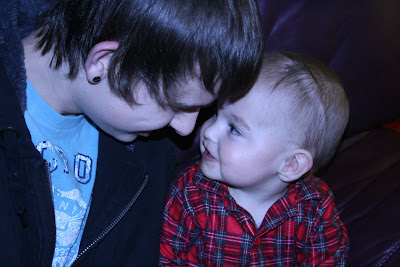 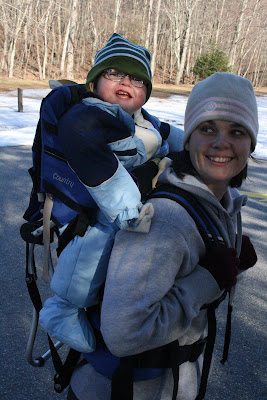 (Colby on mommy's back, trying out the new backpack. His hat is a little big on him, but it served to keep him warm) 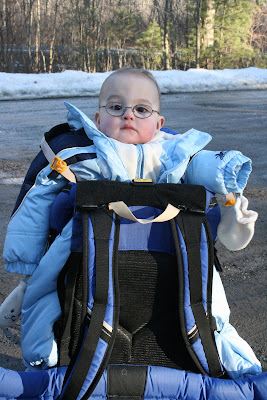 (All packed into his new backpack. He couldn't really move around too much in it, but he didn't seem to mind at all.) 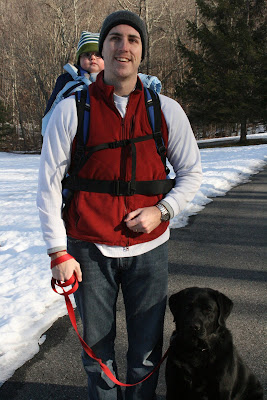 (Colby, Daddy and Hamilton all out for a hike) 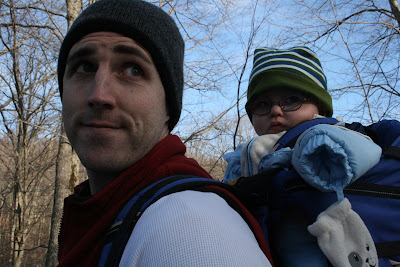 (Daddy's turn to carry the Colbster) 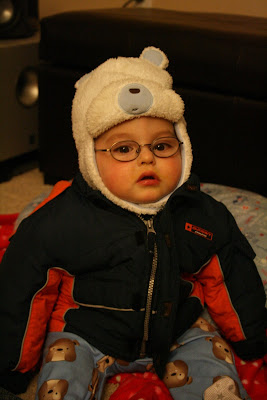 (Colby and I went over our friend's Dave and Nicki's the other night. Here he's in his PJ's, all bundled up, a little past his bedtime, ready to head home and go to bed.) 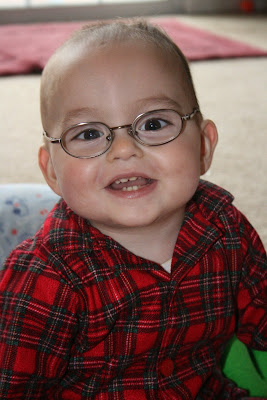 (Colby in his flannel PJ's) 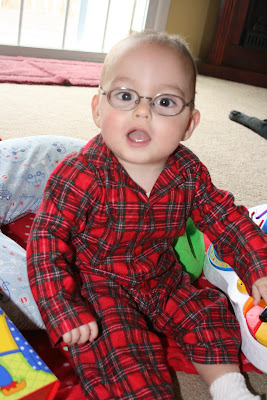 ...are still my favorite.
Sitting here, enjoying my morning coffee. Colby is in his walker, eating Cheereos, watching Barney. He loves music and gets all excited when the kids sing.
I just can't seem to update this blog regularly now a days. I think life is getting busy. Lately I've felt the best I ever have about Colby's future. I think it's because he's started to mimic some words regularly. You can tell he's really thinking about things when you talk with him and he's babbling away.
One new thing he's into is mirrors. He's figured out that you can look in them at an angle and see new things. So he'll look into a mirror, lean one way, smile...then lean another way...smile again.
Our biggest hurdle continues to be his crawling and walking...or lack there of. We're trying to do exercises with him to get him crawling, but he wants nothing of it. I just figured out last night that I can prop him up in front of me, hold his legs straight with one hand and hold him up with the other. Then he has an exer-saucer that's just the right height to come up to his chest. So I had him playing with the things on the top of that last night and he FINALLY kept his knees locked and supported himself. I was so psyched and wanted to show Tracey, but she's working 3rd shift all this weekend so she was sleeping. Well Colby, guess you're just going to have to do it again today to show mommy. : )
Tracey and I have been wanting to get a backpack carrier to put Colby in. We've been looking on Criagslist and I finally pulled the trigger and got one yesterday. We took Colby for a little hike yesterday and both of us tried it on. We love it! It gives Colby a different perspective than being down in his stroller. It frees up our hands and give us a bit of a workout as well! The pictures below above are from the hike.
We've really been making it a point to have Colby wear his glasses just about all the time and it's making a difference with his right eye being turned in. He really doesn't mind wearing them either anymore. I think he can probably see better with them on so he may understand that it benefits him to keep them on.
I'm not sure how much Colby weighs now. He has a doctors appt in a couple weeks so we'll get an idea then. He's still small for his size, but catching up slowly.
I've been taking videos of Colby here and there. I love documenting his progress. Already I look back and can't believe both how small he was and how far he's come.
Posted by Scott at 7:46 AM

Love the pictures :) Colby is so cute.
Love, Mary and Hannah

i fell like i am missing the little guy. it was fun having him around and getting to know him better. tracy, i like the back pack you got me, it is much better for use in the housel I'm glad to see you got one as well. (the out door kind)

Let me know when colby will come over again. I have his pacifier just so you know.