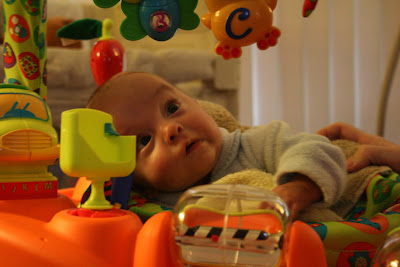 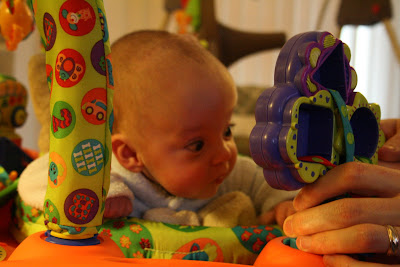 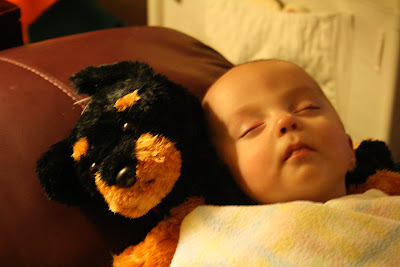 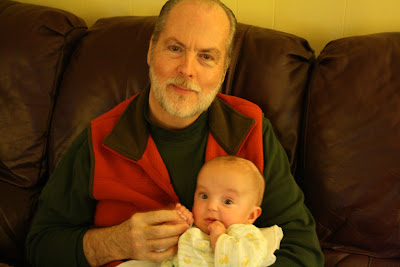 I guess this will be the rhythm now...updating the blog about once a week or so. Things are just too busy now a days and honestly there aren't enough things happening day to day to write about.

Colby is doing wonderfully! Knock on wood, but his shunt seems to be working well with no issues or infections. He is lively, interactive and happy. The doctor had told us to let him fuss for a couple minutes sometimes when he starts crying and that may help him settle himself. Well, we've only been doing that for less than a week now and we see a marked change. Once we see that he's getting tired, we can swaddle him up and put him in his crib and he falls asleep without any crying probably 75% of the time! For the most part, he's continuing to get up every 3 1/2 hours at night, although from time to time now he's pushing the 4 1/2 hour mark. Last night he got up around 2 and then not again until 6! That's a big improvement!

He's also doing great with grabbing at things. He'll grab at some toys or our faces if we get close enough. He's also putting his hands in his mouth a lot. I think by coincidence, he sometimes ends up putting toys in his mouth too now. His head control is still something to work on, but we can hold him up and for the most part, he'll hold his head up. It tends to fall backward a lot, but with some practice, he'll be fine. : )

So that's the big news for the week. Tracey and I are sooooooooo happy that Colby continues to progress as well as he is. Yes, he's had a long road thus far, but as we've stated over and over, you just need to get trough the tough times to then enjoy the better days.
Posted by Scott at 9:06 AM

Tracey and Scott
Colby is looking sooo good!! what a looker ha ha, no time at all he'll be rockin out to DMB with you two!! it's so AWESOME to see how far you all have come. You guys are wonderful!!

all my best and happy birthday Scott hope you have a great time at the show!
you guys deserve it!

WOW...Colby is such a big boy!!! So happy to see he is doing great.
Love, Mary and Hannah

It's all the tough times that make you appreciate the "normal life" that much more :) Colby looks so great playing, so happy and alert. I loved the last set of pictures, the black and white of him and Evan deserves a frame :)